Washington, D.C. — While Congress will vote on their reconciled tax bill as early as next week, local organizers and health care voters are keeping pressure on Senator Susan Collins to oppose a tax bill that threatens the health care of millions and raises taxes on 83 million middle-class families. After weeks of protests at her offices in Maine and Washington, health care advocates met with Senator Susan Collins yesterday to implore her to vote against a tax bill that takes health care away from 13 million people and cuts critical funding for Medicaid and Medicare.

Despite the loud public outcry against the bill and the untold harm it would do to her constituents, Senator Collins has not yet indicated whether she will vote for the reconciled bill — but calls on Senator Collins to oppose the tax bill have only grown louder. Videos from everyday citizens that were arrested in Collins’ offices — like Jim Betts and Tina Davidson — and health care activists like Ady Barkan show that constituents will continue to tell their stories to urge Collins’ to vote against this disastrous bill. 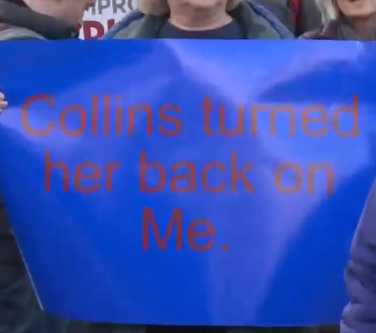 Last week, Save My Care also began airing a new television ad that demands that she oppose the final version of the GOP tax scam to repeal health care and avoid being played by the GOP leadership.

Below is key press coverage of and content from the grassroots actions.

Bangor Daily News: Collins ‘let the people of Maine down’ with her vote to pass tax bill, protesters say

New York Times: Susan Collins and the Duping of the Centrists [Editorial]

The Washington Post: Susan Collins is getting it wrong [Editorial]